The MMR vaccine is given at around 12-15 months of age, and the mean age at which parents of children with autism first report concern is 18-19 months - irrespective of whether or not the children have received the MMR vaccine. Hence there will inevitably be a close temporal association for affected individuals. None of the other normally accepted criteria for demonstrating causality were met (or even discussed).

Was there any epidemiological evidence?

Presumably in response to the call for further investigations, Taylor et al (1999) undertook an epidemiological study to investigate Wakefield's claim that the MMR vaccine may be causally associated with autism. They concluded that since there was no sudden change in the autism trend line after the introduction of MMR vaccination, there was no evidence for a causal association between MMR and autism. This provoked a letter to the Lancet from Wakefield (1999), who criticized the study, and presented data himself purporting to show a delay in the increase in number of cases of autism in UK compared to the USA concurrent with the delay in introduction of MMR. For critical evaluation we reproduce his figure below:

Taking this graph at face value, it shows that diagnoses of autism increased rapidly from the late 1970s in both the USA and the UK. But it simply does not show a delay in UK (where the MMR vaccine was not introduced till 10 years later) as argued by Wakefield. Trying to read anything into the slightly larger increase in autism cases from 1984 to 1985 really is clutching at straws. Given the level of random error from year to year, all we can say is that from 1978 to 1985 the number of reported autism diagnoses appeared to increase (more or less) exponentially in both countries. This increase coincided with changes in criteria for diagnosing autism - to which the great majority of scientists ascribed the increase in reported cases.

In addition Cox & Kirkham (2007) point out that it is misleading to interpret these graphs as showing time trends in diagnosis 'incidence' since they are actually derived from the age distribution of autism cases. Many assumptions have to be met for these to be interpreted as 'autism incidence'. Even if we were to accept that there was prima facie evidence for temporal association in the MMR autism trends, there are various criteria that should be met if one is going to postulate the MMR vaccine causes autism. Authors should as a matter of course go through these criteria and make a reasoned judgement. Yet again, as with the 1998 paper, this was not done - another black mark for the Lancet referees (if they existed) and the editor.

What was the media's role?

Some accounts of the MMR fiasco focus upon Wakefield's original 1998 paper, depite the fact that it was Wakefield's 1999 letter to the journal which really got things moving. Once the media decided to take up this story it acquired a life of its own. In just one month, early in 2002, there were hundreds of media reports - described by some as a 'feeding frenzy'. Uptake of the MMR vaccine dropped alarmingly, and health workers started warning of the probable return of measles as a serious public health problem.

The media's role in this was detailed by Hargreaves et al. (2003). Fifty-three percent of people surveyed in UK assumed that, because the media gave both sides of the debate equal coverage, there must have been equal evidence for each. This despite the fact scientific opinion overwhelmingly rejected the claim of a link between the MMR vaccine and autism. Only 23 percent of those sampled were aware that the evidence favoured supporters of the MMR vaccine. Hargreaves et al. concluded that the use of so-called 'balanced' news reporting achieved the exact opposite, by wrongly creating the impression of an equal weight of evidence.

It is debatable in this case whether more blame should fall on the researchers (for bad science), the journal (for publishing it) or the media (for sensationalising and misreporting it). Wakefield's initial suggestion of a link on the basis of just eight cases, attributed to MMR vaccination by the child's parents or their physician, was completely unjustified. However, the fact it (and the subsequent letter) ever got into print was entirely the fault of the journal editor and its referees, and both the author and Lancet editor would appear to be responsible for this misrepresentation of results.

The effects of all this were magnified by the vast amounts of inaccurate reporting by the media so that, in the end, much of the public ended up with a highly biased fraudulent picture of the risks of the MMR vaccination. A sustained campaign in UK to reassure parents limited the damage there, but anti-vaccination campaigns thrive on the internet worldwide and have seriously affected uptake of MMR vaccination in several developing countries.

A Nigerian child with measles
(Photo: courtesy of Wikipedia/Mike Blyth) 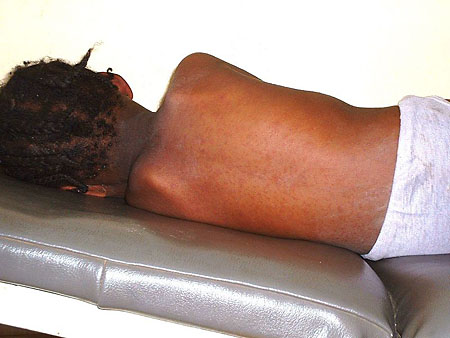 Why were Wakefield's MMR papers ever published?

This story does not end there. Deer (2011a), (2011b), (2011c) accused Wakefield and some of his coathors of 'data fabrication' (fraud by any other name). In most of the 12 cases the children's ailments, as described in The Lancet, differed from their hospital and GP records. Although Wakefield's research paper claimed that problems came on within days of the MMR innoculation, medical records suggest this was true in only one case. In many cases, medical concerns had been raised before the children were vaccinated. Hospital pathologists, looking for inflammatory bowel disease, reported in the majority of cases that the gut was normal, yet the Lancet paper showed them as abnormal.